Since the first win in 1961, Honda went on to dominate the 50, 125, 250 and 350cc classes of Grand Prix racing, but had not yet entered the premier class, the 500cc class. In 1965, Honda decided to compete in the 500cc class. Debuting in 1966, the RC181 became the vanguard of Honda’s new challenge, powered by an air-cooled 4-stroke inline 4-cylinder DOHC 4-valve engine. The engine was simply structured, compared to other Honda engines at the time, but boasted the highest output of 85PS. The 1966 500cc class season opened in Hockenheim, West Germany. Although the RC181 was well matched to the high-speed circuit and won the West Germany Grand Prix by a convincing 26 seconds, entering the 500cc class as the RC181 and Honda intended to go on. Round Two also resulted in victory, but in Round 3 (Belgium Grand Prix), rider Jim Redman fell, preventing him from riding in subsequent races. Mike Hailwood, standing in for Redman, went on to win three grands prix, giving Honda a total of 5 wins and the constructors’ title in their first year of competing in the premier class. This would be the first step in Honda’s relentless challenge in the premier class for years to come. 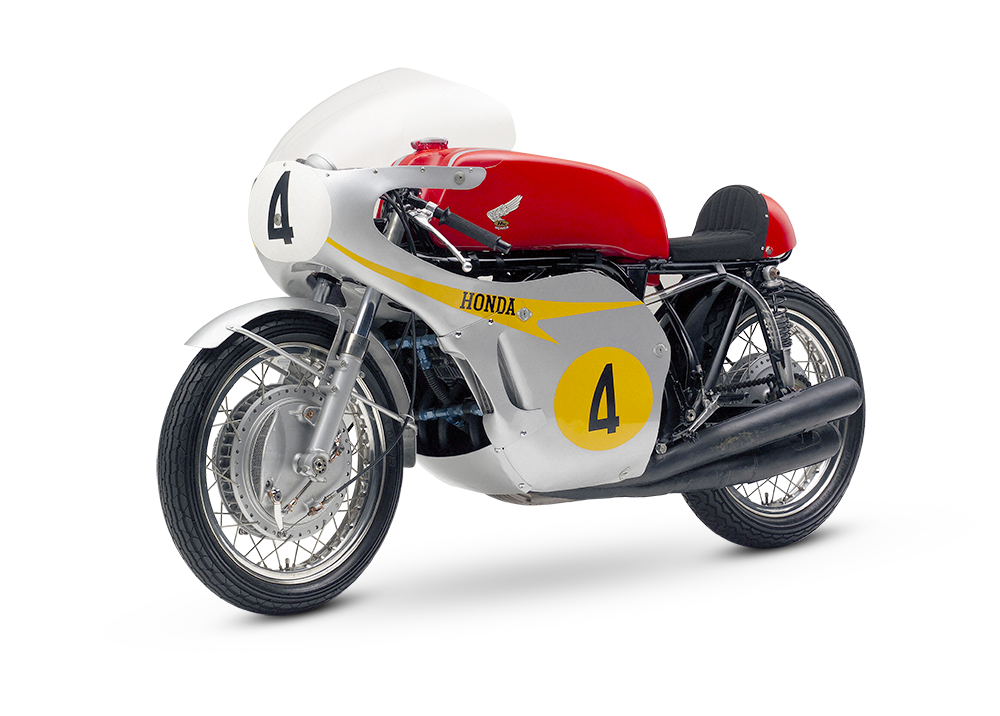 The four-stroke NR500 was developed for Honda’s return to Grand Prix racing in 1979. Honda decided to challenge for the title with a four-stroke machine in the 500cc class, then dominated by two-stroke machines. It was no easy task, with rival two-stroke engines outputting 110PS at around 10,000rpm. For the four-stroke NR500 to even match this output, it would simply have to rev to 20,000rpm, twice that of a two-stroke. Honda’s aim was to output 130PS/20,000rpm, but such an engine did not exist at the time. After trial-and-error, Honda produced a radically new four-stroke V-4 engine, with oval pistons, and eight-valves per cylinder. With its monocoque frame and use of new materials, the NR500 was packed with advanced technologies and ideas from Honda. During development, numerous engines were sacrificed, being simply unable to tolerate such high revs. Honda kept on challenging, and in August 1979, debuted with an output of 108PS/18,000rpm. Although not quite as powerful as its initial goals, the NR500 would be further evolved over the following three years. In 1980, the NR500 returned to GP racing for three races, finishing twice, in 15th and 12th. Although in 1981 the NR500 finished only once in a race, the engine was steadily improved with every race, and in the end, generated 135PS/19,500rpm. The NR500 was at a disadvantage in Grands Prix, as races at the time were push-started, favoring the lighter and easily started two-stroke machines. The NR500 did not win any titles in the premier class, but during the three-year challenge Honda had accumulated technologies that would be invaluable later on. 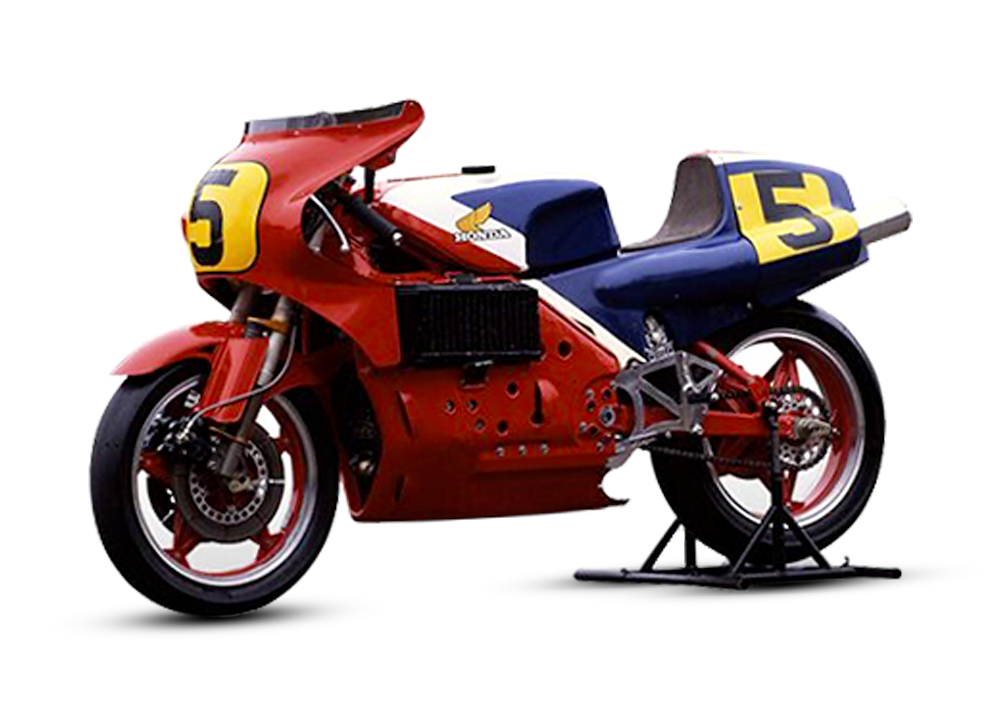 In 1979, the two-stroke RC500M won the 500cc class of the Motocross World Championship and after that Honda’s motocross machines performed well all over the globe. In Grand Prix racing, however, Honda was struggling with the four-stroke NR500. Opinions swung within Honda towards placing winning first, with tried-and-tested two-stroke engines, and the NS500 was thus developed. Its new engine had a unique V-3 layout – similar to three motocross engines combined into one – and was compact and lightweight. Its maximum output reached 120PS/11,000rpm, and Honda poured its technologies and experience into building a great all-round machine. The NS500 debuted in 1982 and was a strong championship contender from the opening round. In Round 7 (Belgian Grand Prix), Freddie Spencer rode the NS500 to Honda’s first 500cc class win in 15 years, and also won Rounds 11 and 12, finishing the season with three wins. In 1983, the championship title was an absolute requisite for the NS500, which was modified to be lighter and more powerful. The engine’s output reached 130PS/13,000rpm. The NS500 and Spencer battled for the title in all 12 races with Kenny Roberts (Yamaha), each rider scoring six wins. The NS500 and Spencer won the constructors’ championship by a mere two points. The NS500 was then commercially released as the RS500, with specifications largely unaltered, and enjoyed by riders worldwide 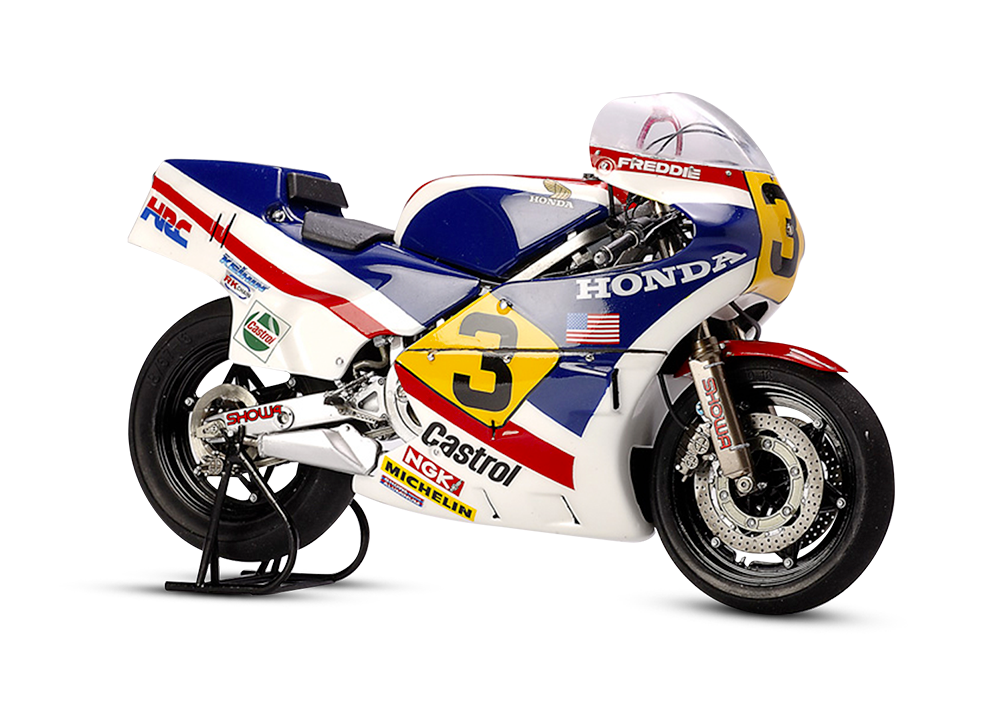 Grand Prix racing went faster every season in the 1980s. The NS500 – Honda’s crown jewel at the time – was close to fully developed, reaching the limits of the power it could create. Honda needed a new machine that matched the times. The NSR500 was developed with a V-4 engine, which would provide a maximum output advantage. The 1984 model NSR500 had a unique layout, with the fuel tank under the engine and the exhausts above. Although the layout represented Honda’s will to challenge the technological status quo, performance was unstable, and results were not up to expectations. The engine, however, with its output of close to 150PS, was top-class and displayed the NSR500’s potential. The NSR500’s chassis performance was improved the following year through further development, and from the start of the new season, the NSR500 lived up to its potential: winning 7 out of 12 grands prix to give Honda the riders’ and constructors’ titles at breakneck speed. Since then, the NSR500 was consistently in contention for the championship, winning titles in 1987 and 1989, but Honda was not satisfied, striving for a manageable 150+PS machine which riders could control and fully exploit. This challenge bore fruit in 1994, the year the NSR500 began achieving what had never been done before. Mick Doohan, as Honda’s new ace rider, dominated the season, winning nine grands prix of 14 to clinch the title, and from then, won six straight titles until 2001 – setting a new standard for GP machinery. In 1997, the NSR500 won all 15 grands prix (Doohan: 12 wins, Crivillé: 2 wins, Okada: 1 win). Although the NSR500 had forged a defining era, setting new records, such as Valentino Rossi claiming Honda’s 500th World GP victory in Round 1 (Japanese Grand Prix) of the 2001 season, it raced its last season in 2002, the year that the 500cc class was renamed the MotoGP class. As Grand Prix racing transitioned to 990cc 200PS four-stroke MotoGP machines, the NSR500 underwent numerous improvements, reaching a maximum output of 180PS from only 500cc. The NSR500 battled on, even managing a second-place finish, but gave way as Honda’s ace to the new, next generation four-stroke RC211V which dominated the season. The technology and philosophy behind the NSR500, winner of 10 riders’ titles and nine constructors’ titles despite being largely unmodified over 19 years, undoubtedly influenced development of the RC211V. 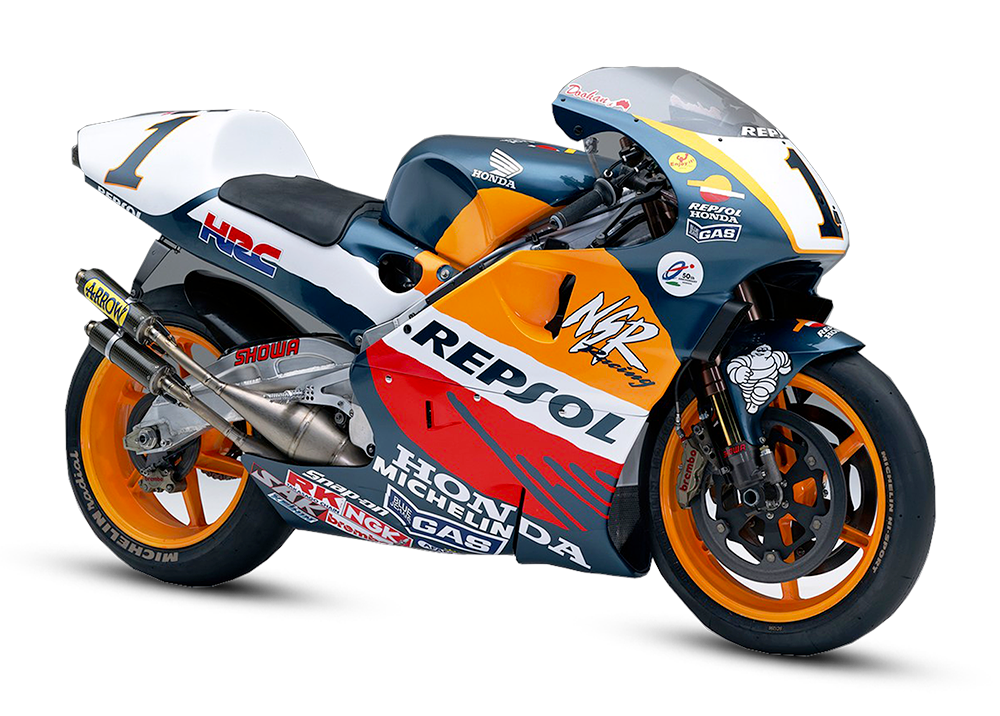 Grand Prix regulations underwent major changes in 2002, with the 500cc class being renamed MotoGP class, and four-stroke machines’ maximum displacement being set at 990cc. In response to these changes, Honda had unleashed the four-stroke RC211V. Two decades had passed since Honda had last developed a four-stroke GP machine, the NR500. The displacement of the RC211V was 990cc, the maximum allowed under the new regulations. Honda’s challenge was to develop a previously unheard-of five-cylinder engine, with a maximum output exceeding 240PS. In the 2002 season MotoGP class, two-stroke and four-stroke machines raced side-by-side, and to maintain equal conditions between the machines, maximum displacement of two-stroke engines was limited to 500cc. The RC211V was a runaway success, winning 12 of the 16 grands prix, giving Honda the riders’ and constructors’ titles. The newly crowned champion, Valentino Rossi, had won 11 races to score a record-breaking 355 championship points, proving the power of the RC211V. In 2004, Honda defended its constructors’ title with seven wins, and in 2006 won both the riders’ and constructors’ titles with eight Grands Prix victories, conquering a closely fought season only after Nicky Hayden secured the championship in the final round. 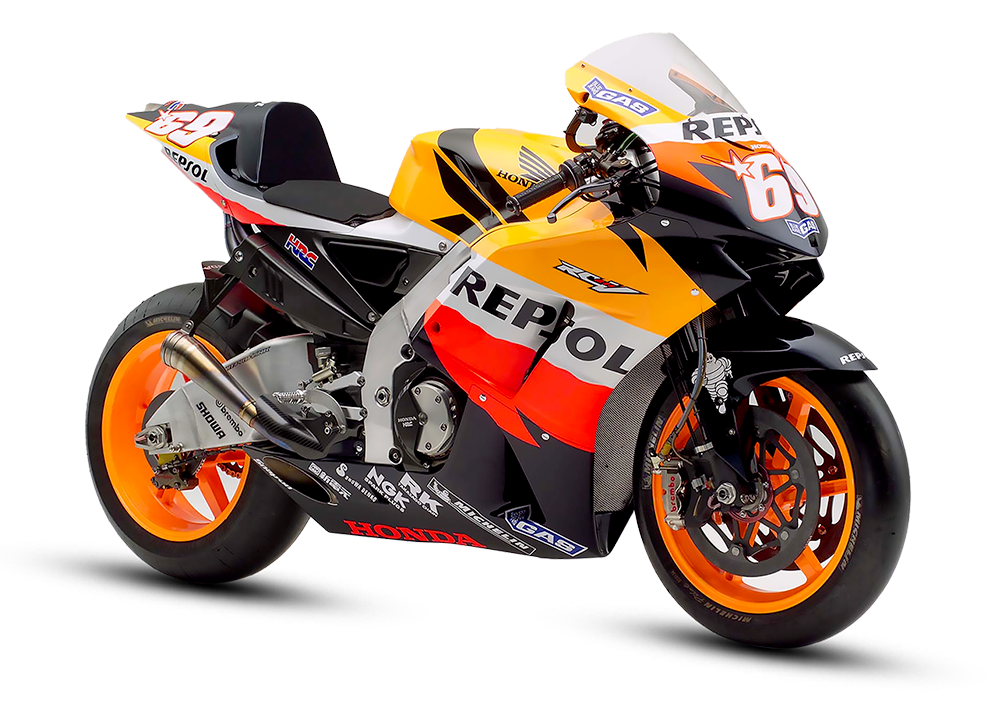 In 2007, MotoGP class regulations were changed to curb the excessive speeds the machines were reaching. The maximum displacement for four-stroke engines was reduced from 990cc to 800cc. To comply, Honda released its successor to the RC211V, the RC212V. To avoid disadvantages due to minimum weight regulations, Honda replaced the V-5 engine which powered the RC211V with an engine it had more experience with – the V-4 engine. Honda was adamant in winning, even under the new regulations, but in the 2007 and 2008 seasons, managed only two wins each at the hands of Dani Pedrosa. Victories were hard to come by in 2009 (three wins) and 2010 (four wins), but in 2011, Honda’s hard work paid off with the spectacular style of Casey Stoner. The 2011 RC212V was a radical modification, not only the engine, but every aspect was modified, especially aimed at optimizing the center of gravity to improve cornering. Six MotoGP riders were given the task of racing the RC212V, and one rider in particular, Casey Stoner, who had just joined the Repsol Honda Team, stood out as he won 10 of the 18 grands prix to become World Champion. Andrea Dovizioso finished third, and winner in three races, Dani Pedrosa, fourth to give Honda the riders’, teams’ and constructors’ titles. 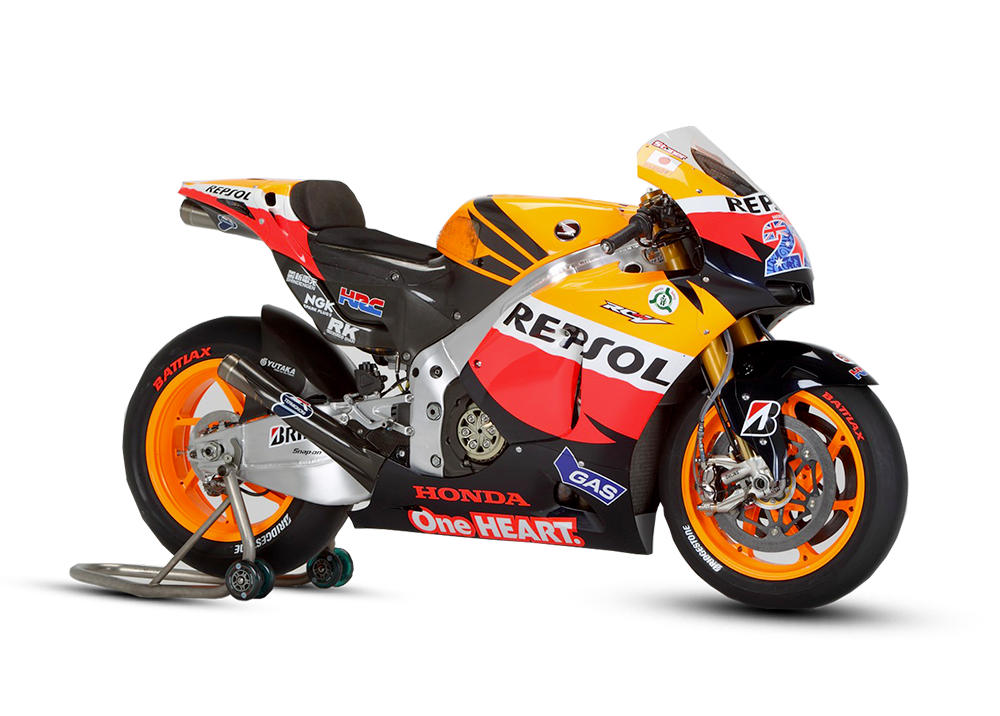 The RC213V was unleashed in 2012, designed specifically for the new regulations that increased engine displacement from 800cc to 1000cc. Two types of machines (1000cc and Claiming Rule Teams) raced in MotoGP this year. The RC213V had increased output due to the larger engine, but as fuel tank capacity was restricted to the same 21 liters as before, too much focus on output alone was not feasible. The 2012 model had to find the best balance between output and fuel economy. Another issue that had to be cleared was weight. 2012 regulations raised minimum weight from 150kg to 153kg.

All manufacturers built their racing machines to comply with the new regulations, but during off-season testing, the regulations were suddenly changed, raising the minimum weight once again, to 157kg. In motor sports, even an increase of 100g drastically changes the machine’s behavior. Every team, including Honda, was forced to redevelop every aspect of their machines. As the season started, a new problem – chattering from the front tyre – arose. Honda persevered and continued developing the machine throughout the season, ending on the podium in every race, and winning 12. Honda won the constructors’ title for the second year running, and its factory team – the Repsol Honda Team – clinched the teams’ title by winning 12 grands prix. 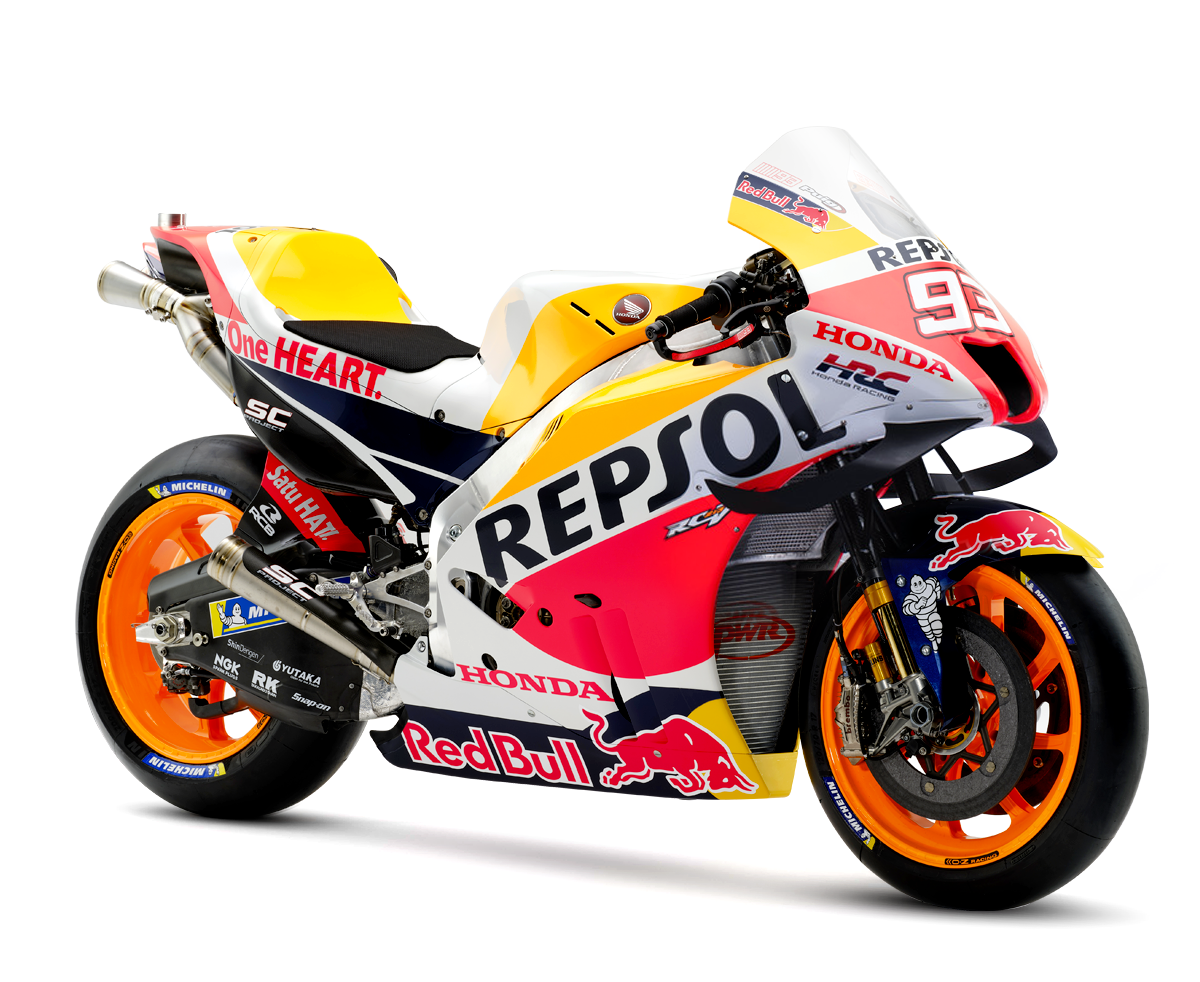 In 2013, Marc Marquez entered the premier MotoGP class, and with his promising talent since his Moto2 days, rode the RC213V to victory in six races, becoming the world’s youngest world champion, and contributed to Honda’s triple crown. Marquez and the RC213V went on to dominate the 2014 season from the opening round winning 12 straight grands prix, giving Honda its second consecutive triple crown with a total of 14 wins in 18 races, rewriting the records including the greatest number of wins in a season. In 2019, Marc Marquez and the RC213V would set a new record for points scored in a season – 420 from 19 races.

The RC213V continues to write history, winning seven constructors’ championships and six riders’ titles since its introduction. Each year the 1000cc machine is refined and improved in line with the MotoGP World Championship’s ever-changing rules.